Is Greenspan the worst Fed chief ever? 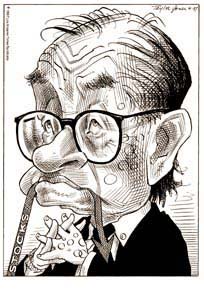 So you agree with the article below?


QUOTE
Greenspan: The worst Fed chief ever
The Fed chairman thinks the central bank has done a fabulous job during his tenure. I beg to differ. Let's set the record straight.


Alan Greenspan gave a speech recently titled "Economic Flexibility." It should have been called "Damn, I'm Good," because the world's biggest serial bubble blower -- and most incompetent, irresponsible Fed chairman of all time -- tried to rewrite history. My column today will endeavor to set the record straight.

At least he was nice enough to organize his speech so that the majority of objectionable material fell into seven or eight consecutive paragraphs, as he tried to set up Ben Bernanke (his likely successor) to be the fall guy for all of the problems that Greenspan and the rest of the yes-men at the Fed have precipitated.

He's got the dates but not the cause
I'll turn first to his brief 1990s synopsis, in which he claimed: "Yet the significant monetary tightening of 1994 did not prevent what must by then have been the beginnings of the bubble of the 1990s. And equity prices continued to rise during the tightening of policy between mid-1999 and May 2000."

His observation of when the mania really took hold and mine are exactly the same. It did start in late 1994. Of course, as with everything, he recognizes the end result but has absolutely no clue as to its cause. The reason for the continued rise in equity prices was that the Fed panicked in mid-1995 and reversed its tightening course after Orange County (and other leveraged entities) blew up. Next, the Fed bailed out the Asian crisis in 1997, Long-Term Capital Management in 1998 and fears of Y2K problems in late 1999.

Continuing on, he notes: "Indeed, the equity market's ability to withstand periods of tightening arguably reinforced the bull market's momentum." No, it was his endless bailouts that caused folks to believe in the notion of a "Greenspan put." Purely and simply, it was his practice of bailouts and market-cheerleading (which reached fevered pitch at the peak) that turned the boom to bubble
Next, he follows up with this incredible statement: "The FOMC knew (my emphasis) that tools were available to choke off the stock-market boom, but those tools would only have been effective if they undermined market participants' confidence in future stability." To which I say: Correct, that is the idea. From time to time, you have to take away the punchbowl. But just remember that term "tools," because we'll see some examples shortly.

On to his summation of the aforementioned statements: "Market participants, however, read the resilience of the economy and stock prices in the face of monetary tightening as an indication of undiscounted market strength."

That's his lame excuse for why the market went up. Wrong.

High-tech is still the scapegoat
He then next turns to the dilemma the poor Fed was in: "By the late 1990s, it appeared to us that very aggressive action (my emphasis) would have been required to counteract the euphoria that developed in the wake of. "

To finish that thought, Greenspan resorted to the cheerleading that he used at the height of the mania and then laid blame at the foot of " extraordinary gains in productivity growth spawned by technological change," rather than his own bubble-blowing. As I read that, I am laughing, because it's just remarkable how he's still trying to insinuate that we were in a "new era." And that's what drove up stock prices, as opposed to his incompetence.

Highly allergic to accountability
His next comment: "In short, we would have needed to risk precipitating a significant recession, with unknown consequences. The alternative was to wait for the eventual exhaustion of the forces of boom." Got that? It was these unknown forces of boom -- not the Fed -- that precipitated the bubble. He followed up by saying: "We concluded that the latter course was by far the safer." What he means: We realized it was a bubble, but we didn't care because we assumed we could fix it.

So, the Fed understood the reality of the bubble while it was going on (though the Fed claimed not to at the time, a subject I discussed in my daily column last March). Nevertheless, Al said: "Relying on policymakers to perceive when speculative asset bubbles have developed and then to implement timely policies to address successfully these misalignments in asset prices is simply not realistic."

You read that right. It can't be done. It's impossible. Now, of course, it wasn't impossible. I wrote about it until I was blue in the face. Most people with an ounce of common sense knew there was a bubble under way. And, by what I've already shown, the Fed knew too. And yet, Greenspan is still trying to say that it would be unrealistic to attempt to identify bubbles.

In addition, he's ready to hide behind another excuse: "It is difficult to suppress growing market exuberance when the economic environment is perceived as more stable" See? It's just too hard, and, as he already said: "We would have needed to risk precipitating a significant recession, with unknown consequences."

Rusting tools in Greenspan's garage
Even if any of his protestations were true (which I don't believe) and the Fed was afraid of damaging the economy, it has been granted specific tools to deal with periods of speculation. Among them: Regulation T, whereby margin requirements can be raised to reduce risk and change market psychology. (While raising margin requirements to even 100% may or may not have been sufficient to break the stock bubble, the Fed could have at least tried. If that failed, the Fed could then have tightened.) However, for Greenspan to pretend that all he could have done was to raise rates shows that either he doesn't know what the Fed's tools are (i.e., he's clueless) -- or he's not being truthful.

The Fed could also ask Congress to resuscitate the old Regulation X. Part of the Defense Production Act of 1950, this regulation let the Fed set minimum downpayments and maximum mortgage-repayment periods for residential properties. The Fed gave up the authority a few years later.

Of course, when Greenspan wails about not wanting to hurt the economy with rate hikes, none of his lapdogs in the press ever seem to question why the Fed hasn't used the tools at its disposal.

In any case, part of my reason for re-titling Greenspan's speech is due to the following comment: "After the bursting of the stock market bubble in 2000, unlike previous periods following large financial shocks, no major financial institution defaulted, and the economy held up far better than many had anticipated (and we all lived happily ever after)."

Crowing belied by cutting
What I'd like to know is: If this was all so benign, why did he and helicopter copilot Ben Bernanke panic -- to the tune of 13 rate cuts, all the way down to 1% -- about the possibility of deflation in 2001 as the stock bubble unwound? Were it not for the even bigger, more dangerous housing bubble that Greenspan has in turn precipitated, which has only postponed the inevitable, the fallout would have been commensurate with the size of the boom.

He is right about no major financial institutions having defaulted -- though we did happen to lose Enron, WorldCom and Arthur Andersen in the process. But it was largely an equity-induced mania. And, as I've said many times, it did not leave behind a wave of bad debts. The housing bust will do just that.

Culpability, thy name is Greenspan
So, the fallout from the housing boom, the unfinished business from the stock boom and all the derivatives he's championed for his beloved deregulated financial system will combine to hit with full force somewhere down the road. By then, of course, Greenspan will be long gone. He, as well as everyone else who's incapable of understanding what really happened, will be blaming our problems on the next Fed chairman. I will have no sympathy for Ben Bernanke, assuming he moves from the White House Council of Economic Advisors to the Fed (see who I think should be chairman, here). But we must understand what actually took place and not let this arrogant buffoon get away with his attempt to rewrite history.

And that, ladies and gentlemen, is the last I'll have to say about Alan Greenspan, once and for all -- until he makes me really mad.